"Mandala" is a sanskrit word. It's generally admitted that it would mean "circle". But some other translators say it could also mean "spirit"...the truth is probably somewhere between the two !!

It's over 25 centuries old. Since Buddhism exists, it has been a support for meditation. Even if it can be painted or woven, it's traditionally made with coloured rice or sand and then swept away, as a proof that nothing human can last long.

However, artistic or religious symbols and decorations of any sort have very often been drawn, carved or painted inside the strict limit of a circle, whatever the civilization and the place on earth was. As seen in Celtic symbols, Cathedrals rose windows, Navajos drawings...

Nowadays, the word "mandala" is also given to complex geometrical drawings, including or not including symetry. 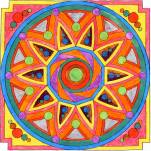 How did I get to draw mandalas ?

I used to be a substitute primary school teacher some years ago. I was replacing a colleague who was on maternity leave. I had the habit to arrive very early in the morning so that I can prepare the subjects I had to teach,  thanks to the only available computer in the school. Searching for documents in the library, I often came across early birds (kids) on day nursery, busy colouring- in some strange circles, peacefully and silently, trying their best to do it properly, respecting symetry as much as they could. They called those strange things..."mandalas", and were apparently very happy colouring them. I knew nothing about this "exotic" drawing at that time (1999). Therefore I got interested in the books in which children chose their mandalas, and I discovered beautiful colouring patterns as well as some ugly rubbish drawn with no imagination at all ! What amazed me the most was the fact children never chose the ugly ones, just as if they could not stimulate their imagination...

Some years after, I learnt that mandalas where used in therapies, especially with troubled young ones. I still can't explain why but I have seen in many occasions that colouring mandalas brings  peacefulness to lots of people, either they're children or adults. And some designs are tremendously gorgeous once they're coloured.

Considering that a pair of compasses could harmoniously find its way within a circle, I started drawing awkwardly my first mandalas in 2000 (by the middle of spring)...and never stopped drawing ever since...I'm very interested in your opinion.  Click on "Mandalarthur", the little mandala character downward, to go back to the main page. Have a nice visit.

PS : special thanks to Ludovic J. who patiently taught me how to build a website.